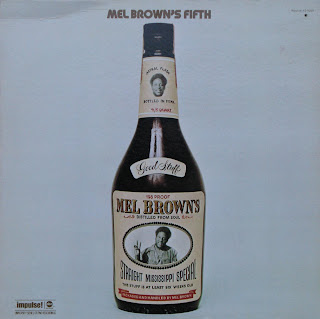 Once again, Mel Brown on Impulse, released in 1971. This one is a whole lot grittier than the other Mel Brown record I posted and it's a whole lot better too, if you ask me. The other players are Jimmy Davis on organ and keyboard bass, Jeff Osborne on drums, Carle Vickers on trumpet, Jake Riley on trombone, Lorenzo Carnegie on alto sax, Onion Miller on tenor sax, Tobie Butler on baritone sax, Clifford Coulter plays electric piano on one tune and Mel's father, John H Brown, contributes a vocal. Other than playing his guitar Mel also plays electric piano, sings and plays bass. The 10 minute jam, Luv Potion is dope.

This Looks Great! Much Appreciated.

Thanks for sharing this Mel Brown......
Jack Flash

Never seen this one before, thanks Steve.

Going back to grab this one after heading Big Foot Country Girl. Thanks!

Steve
When I want an album of mine added on my mp3 player, I usually do a blogsearch for it, rather than ripping it from my vinyl copy. I do this beacause im lazy. When I cant find the record im looking for I rip it from my vinyl copy. From now on, I will be sharing those rips with you, right here, on this blog. Oh, and as for the name of this blog, I just wrote down the first thing on my mind which happened to be the first lines spoken by Tina Turner in her song Bold Soul Sister (its not an exact quote since I felt I had to include "music" somewhere in the title)